The Ukrainian championship 2016 was played in Poltava. The tournament was won by Yuriy Anikeev (19 points), followed by Artem Ivanov (17 points) and Vasyl Pikiniar (14 points). Take a look at some of the games of Anikeev.
World Championship 2016 match

The match for the world championship 2016 between Jan Groenendijk and Roel Boomstra was played in the Dutch towns Groningen, Wageningen and Den Haag. They battled for the vacant world title of Alexander Georgiev, who gave up his world title for unknown reasons. Boomstra won the match convincingly with 16-8. Below an analysis of the three games played in Wageningen can be found. N.B. The comments are in Dutch!
World Championship youth 2016 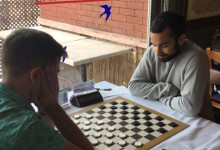 The world championships for youth were played in Izmir (Turkey). The junior boys category was won by Martijn van IJzendoorn. Take a look at some of the games of Van IJzendoorn.